Former President of Republic of Azerbaijan 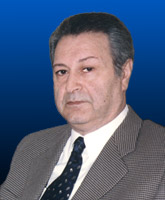 A.N. Mutalibov was born on 12 May 1938, in Baku in the family of a physician. His father  Nyazy Ashrafovitch Mutalibov, surgeon, D. Degree in medical science. He took part in the Second World War (Great Patriotic War). His mother  Kubra Ganievna Mutalibov, gynaecologist. Died in 1988.

In 1956 Ayaz Mutalibov graduated from the secondary school ?189 in Baku. During the school years he was fond of jazz music especially of Elvis Prestly`s and The Beatles. He was the member of the school team on volleyball. 1956-1962  a student of Azerbaijan Institute for Petroleum and Chemistry named after Azizbekov. Being the student of the night classes he got a chance to become aware of work manufacturing process.

1959  Design office in Baku plant for manufacturing of electrical (household) appliances, at that time the plant started manufacturing of the refrigerators. Ayaz Mutalibov worked there for 19 years: formen of assembly department, engineer-designer, technical department head, chief engineer. At 26 he was appointed as the director of the plant and in 1974 he became the Director General of industrial Corporation "Bakelectrbytmash".

1977  elected as the Second Secretary of Nariman Area of the Azerbaijan Communist Party.

1979  Minister for local industry of Azerbaijan.

1982  State Planning Committee Chairman (Gosplan) and Azerbaijan Council of Ministers Chairman Deputy at the same time up to January 1989.

January 24, 1990  elected as the First Secretary of the Azerbaijan Communist Party. Elections had been conducted on the alternative basis on A. Mutalibjv`s initiative.

May 1990  Supreme Council of Azerbaijan elected A. Mutalibov as the President of the Republic.

September 1991  A. Mutalibov suspended his powers as Parliamentary President and declared of direct nation wide alternative elections. He believed it had been the way for the confirmation of his own legitimacy. By over-whelming majority of votes the people of Azerbaijan elected Ayaz Mutalibov as the President of Republic.

September 1991. The last Congress of Azerbaijan Communist Party was convened. The resolution on its self dissolution was approved.

February, 25, 1992  The opposition as the result of Azerbaijan population massacre in Khojala settlement on the Nagorny Kharabach territory insisted on the calling of the Republic Supreme Council extraordinary session. And A. Mutalibov came under strong pressure to resign having accused him in the tragedy. The deputies had been hostages of the armed opposition. To escape the inevitable bloodshed Ayaz Mutalibov had to resign.

The very next day "People's Front" committed coup and the legally elected President had been obliged to leave the Republic to be the political immigrant for long years.

Ayaz N. Mutalibov has been residing in Moscow. Being in expatriation Ayaz Mutalibov as the citizen of his country has been doing his best for its revival: articles, interviews, meetings with his countrymen.

In May 1999 in Moscow the inauguration of the first Azerbaijan mosque had taken place built on the initiative and by donations of the Azeris diaspora.

April 2000  Ayaz Mutalibov adherents in Baku declared on the formation of the new Party "Civil Unity". Its main purpose is the consolidation of all progressive forces of the society. Pick of the society  men of science, honored Art Workers, political figures all of them have united to support the first President of Azerbaijan. They are certain  together they will be able to settle the main tasks Azerbaijan has faced today.

MY FAMILY  They are: my wife Adyla khanum, my sons Azad and Zaur, daughters-in-law Nargize and Elnara, grandson Tayr and granddaughter Medina.

HOBBY  As I remember myself I was devoting almost all the time to my work: I used to go early in the morning and come back home late at night.